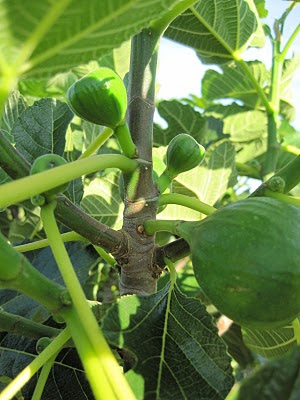 Fig trees produce two crops per year - a first, smaller crop on old wood and a main crop on the current year's growth. The first crop is called "breba" and are termed "olynths" after the ancient Greek city of Olynthus where, apparently, figs ripened early. In the photo, the branch was pruned just above the large fig (which will ripen later in June) and just below the small figs (which will ripen in August). In the literature of figs, breba are generally viewed to be of inferior quality, although I have not found this to be the case. In some articles, "breba" and "figs" are, illogically, argued to be two different types of fruit.