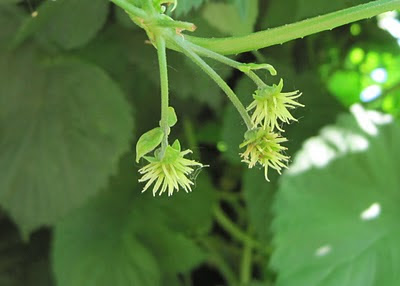 The hop flower, or "burr," is predecessor to the hop cone, used to acidify and flavor beer. The hop plant is dioecious (either male or female) and almost universally propagated by division of the rhyzome. Male plants are rarely grown, and doing so is illegal in some areas of Europe because the unpollinated female flower has a higher content of desirable alpha acids.
This shot from yesterday is from one of my Cascade plants. Cascade is the most aggressive of the dozen or so hops varieties that I cultivate, consistently producing more vine and more cones, earlier, than any other variety. Cascade has a distinctive flavor and is perhaps best known as the hop used to produce Sierra Nevada Pale Ale. The plant that hosts this flower is at least eight feet tall and dense with foliage.