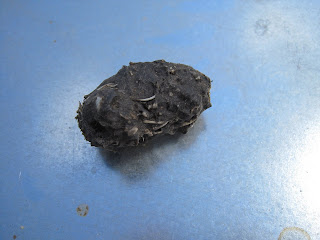 Or, more conventionally, owl pellet. Owls consume small rodents, separate the digestible from the indigestible elements in the craw, and cough up pellets like this one composed of fur and bone. This year, an abundant one for voles, the owl diet is almost all vole (plus an occaional gopher). Hence, vole pellet.
It has been a good year for the vole population because abundant rains through the spring produced lots of feed and cover. A good vole year is a good owl year. The barn owls that annually use our nest box produced two clutches of young, as did several of the owl boxes in a neighboring vineyard, and they've been audible, and visible, most evenings and nights. Barn owls both hiss - a medium-long, edgy sound that I visualize as tearing paper - and click repetitively in 15-30 second bursts (and they make a noticeable "thump" as they land on the metal roof of our house). Infant owls are dependent on their parents for food for the first 6-8 weeks of life and make their demands by repetitively hissing. Watching young owls learn to fly, land, and perch is an entertaining spectacle.
The barn owl (tyto alba) is a global species, the most widely distributed owl and one of the most widely distributed of all birds. Barn owls, with a relatively high metabolism rate for birds their size, are among the most efficient predators of small invertebrates on the planet. A study in the Central Valley some time ago determined that a pair of adult barn owls will feed a family of owlets an average 68 pounds of prey before they fledge. Monitoring one nest box, the researchers found that one brood of owls had been fed 140 pounds of rodents.
This year's best owl experience occured on a late June evening under a full moon. In what must have been a convergence of several different families, there were 8-10 owls circling 80-100 feet overhead, hissing and clicking. Occasionally, one or two would separate from the pack and come down and inspect me, hover 3-4 feet above my head in the light wind, and then, satisfied or not, return to join the others soaring above.
My son's 3rd grade teacher, an eccentric with a genius for instruction, encouraged his charges to collect owl pellets, and Frederik and mom or dad would regularly scout the ground under the palm trees by the golf course in Sacramento's Land Park for pellets. The treasures would be soaked in formaldehyde and then teased apart and evaluated for content. Ecology, anatomy, zoology, fresh air, sunshine, microscopes. Although in this case he helped to produce a mathematician, not an ecologist, I hope that there are teachers like that one still surviving in our public schools.
The meadow vole (microtus; our variety is microtus californicus) is remarkably productive and may be the world's most prolific mammal. Females can breed when they are a month old and produce litters of 3-10 pups every three weeks for the rest of their lives. They go through boom-and-bust population cycles which do not, from local observation, always track with weather or rainfall conditions. They eat green growing things; an irrigated garden is a magnet for voles in the summer.
A good vole year is not a good gardening year, but the owls help significantly.
(Thanks to Frances Oliver's father for the owl box and to Steve Simmons of Merced for some of this information.)