California's modern ecological history is one of successive invasions of non-indigenous species of plants and animals*. The earliest and perhaps most profound transition was initiated by the seeds of European grasses in the guts of the cattle and horses that accompanied the first European explorers. Within probably a century, non-native annual grasses displaced most of the drought-adapted native perennial and annual grasses of pre-contact California. The brown hills of the modern California summer are one artifact of that displacement. Native grasses are mostly green most of the year, and can be seen today only in isolated areas where soil conditions were unfavorable to the invaders.
Our most recent local large invader, an appropriate subject for a Thanksgiving Day rant, is the turkey. A small flock at yesterday's dusk is pictured above. Not native to California, turkeys have been introduced - to be shot at - by the State's Department of Fish and Game (DFG), not an entity generally open to considering the ecological nuances or long range implications of its actions, at least when they involve its hunter-supported programs. Kind of like "shoot first, ask questions later." Or, as a friend likes to say, "ready, fire, aim."
The turkey is native to North America but not to California. DFG released a couple of pairs of turkey onto the Cosumnes River Preserve, without consulting its more science-driven partners on the Preserve, in the mid-1990s, just a few miles from where I sit. We had no turkey visitors here until about 2005, and since then the growth in turkey population has been seemingly exponential. It's not uncommon to see 200 turkeys at one time, in several flocks spread among the grasslands and oak savannah areas visible from Kingbird.
Turkeys are neither cute nor benign. They are voracious omnivores, eating acorns, seeds, roots, tubers, grass, reptiles, and amphibia. In this environment they compete directly with sandhill cranes, nibble on endangered amphibia that we've spent significantly to protect, and appear to get all of the acorns in their forage areas, which doesn't augur well for future oak forests and forest-dependent bird species. They are a scourge on this patch of earth. Local ecosystems are losing complexity and diversity as the turkey population swells.
The turkey population explosion here has coincided with a general rapid increase in numbers and expansion of range across much of Northern California. They've joined deer as a major suburban pest and go with growing boldness into cities - a friend on Sacramento Street in Berkeley reports that they see flocks there occasionally.
Turkeys will be over-abundant for at least as long as humans are around to supress the populations of predators that would enjoy a dinner of uncooked turkey, but one can envision, in time, a new balance** as mountain lion populations rebound and wolves trickle back onto the Modoc Plateau and from there into the Central Valley.
*The late Elna Bakker's An Island Called California (1971) provides a very readable exploration of how and why California plant communities were vulnerable to invasion. An amazing ecologist and conservationist, Bakker worked for years with the Oakland Museum and was responsible for much of its excellent natural history interpretation.
**Alan Weisman's The World Without Us (2007) is an excellent and thought-provoking exploration of this general topic. What would the world look like without us?

Posted by Mike Eaton at 9:22 AM No comments:

out of the (water) closet 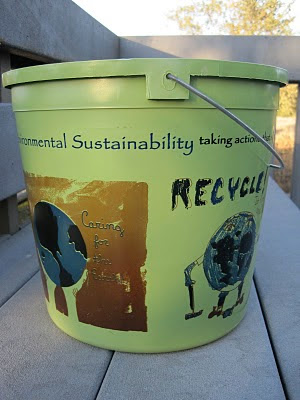 It happens, but it's not widely discussed.
I'm talking about making use of the perfect fertilizer - local, organic, easy to apply, free, sterile, with an NPK ratio of 18:2:5 and plenty of important trace minerals. It's a product of perhaps the best filtration device in existence, the human kidney.
Conveniently, our body places most (80% - 90%) of our excreted nutrients - the good stuff - in the urine. And all of the microbes and other bad stuff, but relatively little of the nutrients, end up in our feces. Diluted anywhere from 2:1 to 5:1 with water, urine is a perfect soil amendment. Undiluted, it speeds the composting process. Used as a soil amendment, one person's urine can provide the nutrients for one person's food consumption, more or less. A perfect circle.
And it gets better. Each flush uses precious water that has many higher and better uses. And each flush has its own carbon footprint from the energy used to pump, treat, and pressurize the water system and treat the effluent on the other end - a footprint that is tiny per-flush but large in the aggregate, especially when counting the energy cost of building and maintaining all of the associated infrastructure. Even more massive is the carbon footprint associated with the process of creating synthetic nitrogen fertilizer out of natural gas and the extensive loss of soil carbon that synthetic fertilizers have enabled.
So why doesn't it happen more? The "ick" factor? Cultural inertia? Just plain ignorance? All of the above, no doubt. Plus a large dose of what Wendell Berry terms the "rift" between body and nature in modern culture, creating a "dualism" that has caused "confusion about the body's proper involvement in the world."
But there are signs of change on a few fronts. A brand new gardening book, The Resilient Gardener, by Carol Deppe, addresses the subject boldly in a subsection titled "The Power of Pee," part of a longer chapter on "Soil and Fertility." Carol gives a quick rundown on collection, dilution and use. Steve Solomon's 2005 Gardening When It Counts tiptoes up to the subject, gives it a strong endorsement, then punts by sending the reader for details to Joseph Jenkins' The Humanure Handbook, a short how-to book available in print or downloadable free from a few web sites.

Globally, "pee-cycling" policies and technologies are advancing rapidly. Separate collection of urine and feces is being done on a large pilot scale in both Sweden and Germany. And a Swedish company, Separett (see www.separett.com) manufactures a variety of source-separating and composting toilets, including an accessory urine tank ("Ejektortank 50 - For the green gardener") that facilitates dilution and garden application.
Outside of the western developed world, where soil enhancement needs are greater and the commitment to costly flush-it-away infrastructure less widespread - and perhaps the "disease of dualism" less advanced - both urine and feces are increasingly seen as resource, not waste. In China, a UNICEF/Red Cross program has installed over a million urine diversion dehydration toilets (UDDTs) over the past decade. UDDTs separate urine (for immediate agronomic use) and solids (for agronomic use after a year of composting). Similar programs are widespread throughout Africa.

Closer to home, an amazing non-profit organization called SOIL (Sustainable Organic Integrated Livelihoods, www.oursoil.org) is working to rebuild soil resources and improve sanitation in Haiti through the recycling of human wastes.SOIL volunteers embrace a philosophy of "liberation ecology" with roots in "liberation theology."

Liberating urine from the bounds of misconception and cultural prejudice - now there's a simple concept with far-reaching potential benefits.
Update: The Haiti project is featured by the New York Times here.