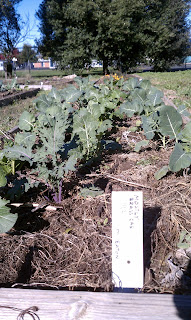 Fairsite Elementary School (one of many alma maters, incidentally) is in downtown Galt. Because of population shifts, it's now mostly bereft of students but does host adult education, ESL, Head Start, and nutrition programs. Twenty years ago, several enterprising teachers and their students created an extensive school garden at one corner of the grounds. A year ago, a few of us rehabbed the old garden and planted a range of winter crops. (It was actually a narrow range - from fava beans to fava beans - since we were too late for anything else. But the favas grew exuberantly, giving it that worked-in garden look, enriching the soil, and providing hundreds of pounds of beans in the early spring.)

We followed that winter garden with an aggressive summer garden of tomatoes, beans, squash, and melons, with a handful of volunteers participating and the harvest intended for the Food Bank housed on site. Unfortunately, over the summer we suffered a series of vandalism acts in which most of the crops were destroyed. Boredom + not knowing where food comes from = a tragic equation.

As a result, most of those involved in the garden decided that their efforts would be more productively focused in their own back yards, on growing extra that could be delivered to the food bank.

A few of us have hung in there and we've planted a few beds to vegetables this fall. Kingbird has two beds of broccoli etc. and three beds of fava beans. We're hoping for a decent stream of fresh goodies into the food bank in March and April.


Updating this: Urine separation and reuse makes the New York Times! The report is from Haiti, where the soil fertility and sanitation benefits are both desperately needed ...