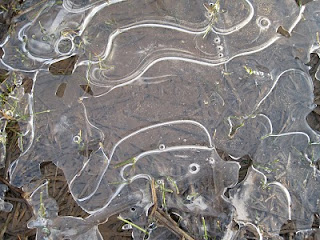 The photo is just post-Thanksgiving, when for a few nights some local communities set new records for night-time low temperatures and we had daytime highs in the mid-40s.
Last night's low temperature here was 54 degrees, tying or setting a record high minimum for this date. Last night's minimum was above the historic average maximum daytime high temperature for the date (52 degrees) by 2 degrees. The record high for this date in history is 66 degrees. If the sun shows itself (at 11 am it's overcast and 60 degrees) that record may fall.
The (perhaps previous) record high minimum for this date was set in 2004, at the time the fourth-hottest year on record for the planet as a whole. 2004 has since slipped to seventh-place; 2005, 2009, and 2010 all turned out to be hotter. Ten of the hottest years on record have occurred within the last twelve years. 1998 (during a "solar maximum") remains officially the warmest year ever. 2010 is likely to bump 1998 to second place, but that won't be determined for official purposes until early next year.
"Solar maximum" refers to the sunspot cycle, an oscillation of solar heat output (and thus receipt by the earth) that looks similar to a sine wave and generally repeats itself every 9-14 years. Climate change denialists for years took cover from the fact that 1998 was a year of solar maximum (the actual peak was in 2000) and confidently predicted that the years 2005-2010 would log in on the cool side because they coincided with a solar minimum (the peak of the next maximum is predicted for May 2013).  So much for wishful theory. The reality is that the increasing heat-trapping capacity of the earth's atmosphere (a function of increasing carbon dioxide levels - from about 360 parts per million in 1998 to about 390 ppm today) has been more significant to actual climate than declining solar input.

I'm not looking forward to seeing what the 2012-2014 combination of a solar maximum (although it's projected to be a weak one) and circa-400 ppm CO2 concentrations gives us.