change comes to the henhouse 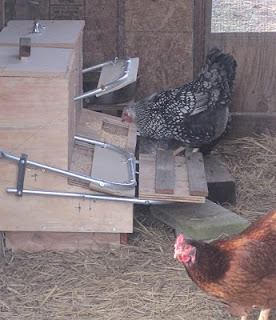 The hens got a couple of home-made "treadle feeders" this week. Much alarm ensued.
The new feeders replace open feeders that had gradually attracted more and more yard birds over the past few years. Chief culprits were the white-crowned sparrows, followed by the (non-native) English or house sparrows, mockingbirds, and scrub jays. The yard birds were getting a sizable portion of the purchased feed, and the available feed was in turn attracting more and more birds, some of which (especially the white-crowned sparrows) are major nuisances in the garden.
Two feeders, one for grain and the other for pellets, have treadles that when stepped on descend and leverage open a counter-balanced board that normally covers the feed compartment. The hen steps off the treadle, it rises and the cover descends.
It took about a week of adaptation for the girls (and Gaspar) to get comfortable with the new system. I tied the cover in the open position for a few days, and then half-way down for a few more days. The moving parts generated much excitement, and the thump of the descending cover emptied the room a number of times. For a while, the chickens seemed to have no perception of cause-and-effect, happy to take advantage of an open feeder but not quite sure why it was open or how to replicate that condition. Quickly, however, they became experts. Hunger is a wonderful motivator.

Posted by Mike Eaton at 8:22 AM No comments: 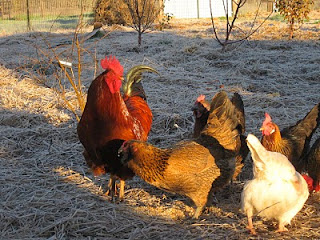 Rooster Gaspar is featured in a new Slow Food Sacramento banner to be used at future events - center-fold status, as it were.
Gaspar is the rooster that almost wasn't. We're not too fond of roosters. They tend to be mean (to the hens and to Ms Kingbird) and noisy, and with all due respect aren't exactly essential to the performance of a flock. Gaspar was one of a mixed-gender crop of chicks acquired two years ago. Roosters begin to differentiate (crest and tail-feathers) at about four months, and we thought we had harvested them all at that point. Gaspar (smart? no, probably just slow) waited until just after the ax was put away to begin to exhibit his male-ness. He was on probation for a while, but proved himself to be neither noisy nor obnoxious enough to merit culling. And while he services the hens in rapid rotation, he doesn't maul them or pull their feathers the way many roosters do.
We're hoping that Gaspar does not become aware of his regional fame, because it might go to his head and distort a near-perfect personality. What might be next? American Idol? Dancing with the Stars?

Posted by Mike Eaton at 9:36 PM No comments: