an eviction and a makeover 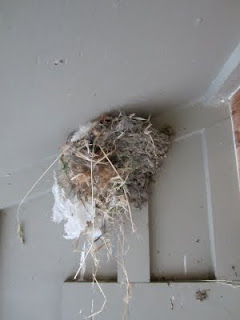 Barn swallows return in early April and construct their nests by early May. The nests are made with mud gathered from the edge of the now-receding slough, pasted high on the wall of the house. We are blessed with abundant barn swallows and usually get a dozen or so nests on the house. The local convention is to destroy the nests and force them elsewhere, but we greatly enjoy the birds (and tolerate the excrement), so we let them nest. A researcher from Cornell visited a few years ago and decreed that we had more swallows nesting colonially (not the usual thing, apparently) than any other site of which he was aware. (Occasionally, we intervene - "right over the door, what are you thinking?!" - and tape kraft paper over the intended nest site.)

The barn swallow is the most widespread of the swallows (and called simply "swallow" in much of Europe, where it is the national bird of Estonia). Its five subspecies occur across the Northern Hemisphere, and most are long-distance migrants. Ours winter in Central and South America, returning north to breed and raise their young. It's a very vocal bird; we eavesdrop on extended, often contentious, group discussions of topics we can only guess at.

In recent years we've been cursed with more and more of another bird, the house sparrow (aka English sparrow). House sparrows are the most widely distributed wild bird species, largely as a result of accidental and intentional introductions of the bird outside of its original Middle Eastern habitat. The first North American introduction occurred in 1852, with the release of 50 pairs in Brooklyn. House sparrows are well adapted to living in proximity to humans. Here, we've gone from zero to many in just a few years. (Because they are non-native and a pest, house sparrows, along with starlings, may legally be killed any time, without limit. We have not resorted to that strategy. Yet!)

The photo above depicts a first for us - the forced occupation of a barn swallow nest by a house sparrow. Barn swallows make a simple cup nest (as below) and occasionally adorn it with a feather or two, always white (only occasionally to excess, as when a mom or dad decided a couple of years ago to attempt to adorn a nest with an 18" long feather from an egret in breeding plumage). House sparrows, on the other hand, are garish, taste-less nest-builders, throwing in everything but the kitchen sink. Here they've added found bits of paper and plastic to an amalgam of grass and straw. There goes the neighborhood.

We hope it's not a trend but fear it might be. 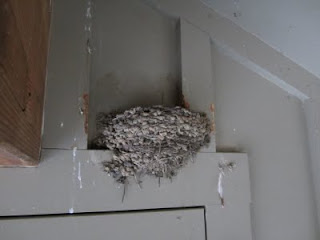