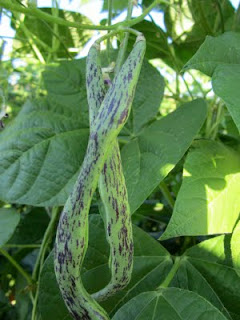 We're awash in green beans, eating copious quantities and sending over 150 pounds (so far) to the food banks this summer. The variety is rattlesnake, an heirloom, open-pollinated so I can save seed and use it next year. We selected rattlesnake after trying a number of varieties. It is stringless and produces delicious green beans and dry beans. The beans tend to mature in clusters that separate easily from the vines, making for (relatively) efficient picking. And the green pods are beautiful, with nice purple highlights that disappear when cooked.
This season I planted more than ever before, and it's becoming a challenge to keep up with the plants. If we fall behind, the plants will decide they've produced enough seed and start to shut down. If we decide that a partial capitulation is called for, I'll red flag a row or two and we'll let those mature into dry beans.
Why "rattlesnake"? Supposedly the purple streaking looks like the coloration of a rattlesnake, but I'm not convinced. Or perhaps the rustle of the dry bean pods sounds like the rattle of a rattlesnake, but don't they all?