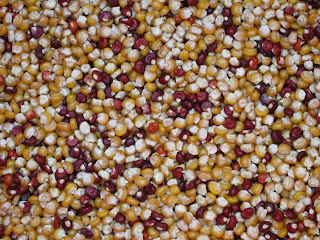 We grew "Roy's Calais flint corn" this summer. It's an open-pollinated corn; we got our seed from High Mowing Seeds of Vermont. According to High Mowing, the variety was originally cultivated by the western Abenaki tribe near Lake Champlain in Vermont and subsequently maintained by pioneer farmers. High Mowing obtained seed in 1996 from a couple in North Calais, Vermont and began marketing it a few years ago.

The corn produces variably colored ears - from a dark red to yellow with shades in between. The reds are recessive, meaning that we'll need to plant a higher percentage of red next year to maintain the spectrum. The strain is reportedly one of the shortest-season (time from planting to harvest) corn available and is marketed as a good variety for northern and cooler areas. It did well here, germinating well, growing rapidly, and producing a heavy crop. I was attracted to the ultra-short season because I was able to plant it a few weeks before I started planting sweet corn and have it well out of the pollination stage before the other corn produced tassels, thus avoiding any risk of cross-pollination.

Flint corn is used for corn meal or hominy; we'll primarily use it to make polenta. Roy's Calais has tested out at 11-12% protein, compared to a typical level of 9% for most flint corns. We may try a little hominy as well, through a process called "nixtamalization," or soaking in a a hydrated lime solution and cooking slowly.

Roy's Calais has been inducted into Slow Food's International Ark of Taste - a process for recognizing important local plant varieties. The description is here. Among its points of cultural interest, it's credited with saving lives in 1816, the "year without a summer" as a result of an ash cloud that blanked the northern hemisphere as a result of an 1815 volcanic explosion in the Dutch East Indies.

We have since discovered another flint corn seed source. As of now nameless, it's a variety being developed through Community Grains, a project of Oakland's Oliveto Restaurant. A neighbor a few mils from here, Mohr-Fry Ranch, is growing the flint corn for Community Grains. It's all-red and has an equally interesting back-story. Supposedly the seed got to Italy from the New World soon after the conquest and was almost lost there in the homogenization and standardization of grain crops that took place there, as here, beginning after World War II. Oliveto's recently discovered the corn being grown in a single garden in Northern Italy and it has now returned home to North America. It's a longer season corn, and of very high stature, with stalks 10' high and more. We haven't yet decided whether to stick with Roy's Calais or shift to the all-red variety.

Oliveto's recipe for polenta is here.