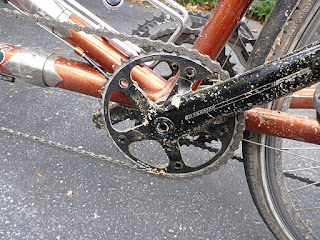 We've enjoyed a ten-day break from the rigors (right!) of Kingbird, bicycling in Pennsylvania and Maryland. We rode the 325-mile long combination of the Great Allegheny Passage (GAP) and the Chesapeake and Ohio Canal towpath. The GAP is an old railbed that has been converted to a first-class bike path, gradually climbing from Pittburgh through the historic coal, coke, and iron/steel production areas of western Pennsylvania to the crest of the eastern continental divide, then dropping rapidly into Cumberland, Maryland, a somewhat faded old milltown on the Potomac River. From Cumberland the C&O canal drops through a series of 75 locks all the way to Washington, DC, and the adjacent mule-path has been preserved as a somewhat rustic route for bikers and hikers. All in all, a remarkably wild, beautiful, and unforgettable experience.

Of course, our travel was historically backward. Pittsburgh, at the Forks of the Ohio, was the 19th Century gateway to the West, key to "pacification" of the Native Americans, jumping off point for the Lewis & Clark Expedition, and doorway to waterborne commerce throughout the Mississippi Basin, and for authenticity we should have been headed northwest rather than southeast.  We made our choice in order to have the gentler pavement and easier grades come first.

Kingbird survived under the able supervision of Lynne, another exceptional wwoofer.