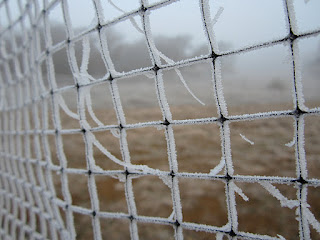 A cold air dump from the north has given us a couple of super-cold (for us) nights. Last night's low was 22 degrees F, the night before 21. Tonight will be just a couple of degrees warmer for Santa.

The cold has caused no damage here. Fabric and lights have kept the citrus from suffering any significant ill effect.

And, on the upside, the change in pattern has, for now, banished the fog. We have sunny days, with this afternoon likely to hit 60.

More troubling is the continued lack of rain: December is poised to go down as the fourth driest here in the historical record. The temporary fence above, coated in ice, encloses a patch of ground that will be corn next summer and protects the cover crop seed from the accursed turkeys. But no rain equals no cover crop, and I'm not desperate enough yet to resort to irrigation.

Friend Hank reports from Gustavus, Alaska that they've got 40 degrees, the snow has melted, and it's raining. He comments that "The world is on its head."
Posted by Mike Eaton at 12:06 PM