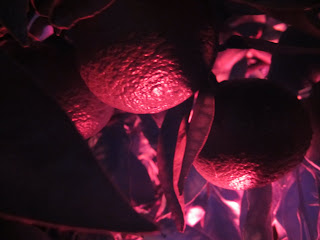 We're stuck in a series of slow-motion weather sequences. Thanksgiving was buried somewhere deep within 10 days of fog, with day and night temperatures oscillating within the 40s and the sun mostly just a theory. The siege of gray was followed by a wild interlude of wind which blew away the fog (and much more) and sucked in a mass of cold air from the north. Days and nights have been since then clear but cold. We enjoy sunshine, pushing temperatures to 60 or so. We have starry nights, dominated this week by a waxing gibbous moon. And very cold temperatures in the night and early morning hours. We've seen 26 for the past few early mornings.

Hard frosts necessitate protection for the citrus, which I assure with our version of holiday lighting - colorful floodlights at the base of the most sensitive varieties, and fabric covers over most. The effect is festive, but only by chance - it's the colored lights, not the white ones, that get marked down for the January sales!

The experts say we've got another week of this to look forward to, at least. 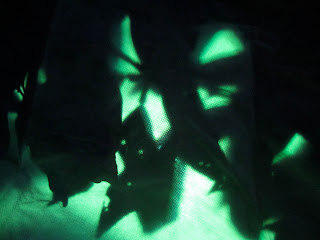