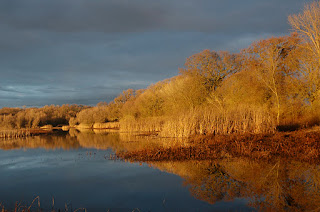 Three days of storms, ending yesterday, washed the world clean and re-injected color and life into our lives, briefly. The picture is near sunset, just west of us. A few minutes later, as we lost the direct light, the gold of the treescape faded to a flat gray-brown. It was a brilliant respite from the foggy winter we've had.

The life was as impressive as the color - about 20,000 snow geese, tundra swans, and white-fronted geese wheeling and calling in the western sky, as the large cranes glided by in the foreground. Another magical moment in the under-appreciated valley landscape. The not-so-good photo below (with a telephoto lens) captures cranes between a fiery sky and darkening landscape - appropriate for birds that the Chinese consider to be intermediaries between heaven and earth.

For numbers, though, nothing comes close to the local flocks of European starlings over the past few weeks. The starling is an introduced bird, a beneficiary of that misguided project whose goal was to bring to North America a pair of every bird mentioned by Shakespeare. It is a major agricultural pest and it competes for nesting habitat and food with native species. A professional ornithologist friend recently estimated an extended overflight of starlings a few miles from here as containing 1.2 million birds.

And, speaking of that long siege of gray? It's back, with visibility this morning at about 100'. Its local effects are much less troubling, though, than what it signifies - the return of the high pressure ridge which keeps storm systems out of California. With rainfall to date at only about 4", compared to a usual of about 10", that's very bad news. 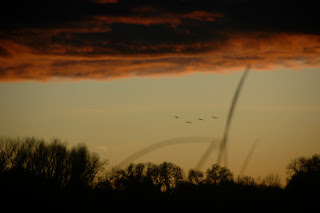 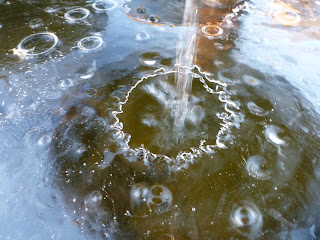 The thermometer was in free fall yesterday evening, registering 28 degrees by 830 pm. I awoke early to 20 degrees, our low for the past few years. The Sacramento record low for this date is 24 degrees, set in 1963. In the photo of one of our bird fountains, the circulating pump came on as usual at 630 a.m., pulled warmer water from below, and started a drip that created the hole in the ice.

After eight weeks of zero precipitation and sub-normal cold, the weatherman promises a return to winter. One more very cold night, then a series of storms queued up, promising a week or more of rain. We need it deperately, and if it turns into a long wet siege I promise not to whine. 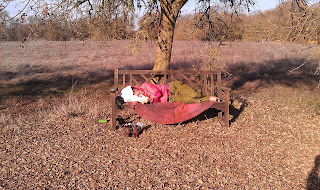 We hold hostage Leela, a charming Australian with a broad set of skills - including of the culinary kind! She's here for a few weeks en route home from study in Brazil. She's helped to tame the grapes with pruners, assisted at the food bank, gleaned copious quantities of persimmons from a tree down the road, and today we'll make soil-blocks and start a round of seeds for the late winter/early spring garden.
Here she pretends to read while drowsing in the sun on a day that saw a record-setting high of 66 F. Yes, it's a heat wave, but the cold wave persists with night-time lows below freezing. And the drought. A couple of early fall storms yielded about 2.5" of rain - and there's been nothing since, compared to a "normal" of about three times that amount. Abnormal, of course, is the new normal, and if the dryness persists through the season it will become a major calamity, different in kind but not impact from the the extreme weather that 2011 saw across the globe.
I think that Leela feels at home here in part because it feels in some ways like her father's and stepmother's home and farm in Tasmania, blogged about here. For her release we hope to exact an invitation to visit. A trip to Australia is probably not in the cards for us, but an invite "in the bank" will help fuel our fantasies and warm our hearts on these cold winter nights!

Posted by Mike Eaton at 8:57 AM No comments: