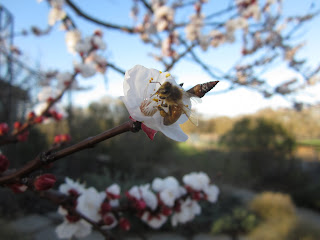 Our warm winter has brought the early apricot varieties out of dormancy and our almonds are set to explode with blossoms any day. One of our two bee colonies made it through the winter, the other did not. The survivors have mobbed the two apricots that are now in blossom.

Although one colony either died or moved elsewhere, our bees generally have it good - a stable environment, year-round sources of nectar and pollen, no chemical insults. That's in contrast to their brethren across the country. Two-thirds of commercial beekeepers in the US move their hives into the San Joaquin Valley each February. They come to pollinate the almond crop; 80 percent of the world's almonds are grown in just five counties of the southern San Joaquin Valley. Scientists' speculate that the stress of travel, the proximity of so many colonies at one time, and the associated chemical exposures may be a factor in "colony collapse disorder."

The warm weather of the past few weeks have the neighborhood wine grape growers in a state of high stress. With consistent daytime temperatures of 50 degrees or higher, grape vines initiate "bud break," the emergence of tiny green spears that will become this season's leaves, branches, and fruit clusters. Those spears are highly vulnerable to frost. We've had temperatures over 60 for a few weeks now, and bud break is imminent on many wine grape varieties. Despite the high temperatures now, the possibility of a hard frost will be with us until the first of April or so. The stage is set for what could be a major economic disaster.