getting the signals straight 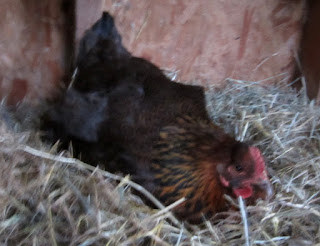 This partridge cochin bantam hen seems to be responding to the instinct to brood her own chicks. She sits in her nest for days at a stretch in the trance-like state that characterizes broody spells, not reacting to the flash of my camera or to a friendly scratch behind the head.

Finding and following those instincts, and getting it right, must be for a modern hen quite a challenge. For millenia, ever since techniques for artificial large scale hatching of eggs and raising of chicks were devised, the tendency to "go broody" - to shift into chick-production mode - has been deemed an undesirable trait in hens, and selected against. The reason is that the broody hen stops producing eggs and refocuses her energy away from egg-making and toward staying alive (with little or no feed) during the 21-day incubation period. The result is that most modern hens are not broody at all, or will at best claim and protect a nest full of eggs for a few days before getting distracted.

The early masters of articifical incubation were the Egyptians, who in the fifth or sixth century BC developed wood-heated brick structures capable of incubating 10,000 - 15,000 eggs at a time, i.e. at a scale not seen again until in the US in the 1960s. One hypothesis is that large-scale chicken production was driven by the need to feed the masses of laborers who worked to build the pyramids. Later, the Romans devised mobile incubators that would travel with the troops.

Because the various cochin strains of chicken are known for their broody tendencies and competency at raising young naturally, I added a few as chicks to my flock last year. They are just now beginning egg production.

This hen (she probably deserves a name) may or may not turn out to be a successful brooder. About a week into her first stretch of brooding I got curious about how many eggs she was nurturing and reached under to check. To my surprise, there were none - zero. She had the behavior down but had somehow missed the basic point. I removed her from the chicken house to break the broody cycle. When she got in the mode again, about a week later (and a week ago), I gently slipped 10 eggs into her nest. We'll see how well she does this time.