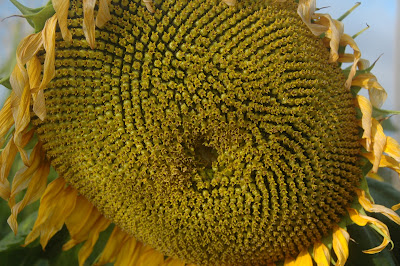 Our black oil sunflowers produce a single 8" head on a sturdy 4-5 foot stalk and just after dawn (below) they point northeast and eagerly await some direct sunlight.

We learned in third grade (the kid's, not ours) that the spiral arrangement of sunflower seeds (and other flowers) exhibit the Fibonacci sequence; an 8-foot, summer-after-third grade sunflower was nicknamed Fibby. At the heart of the Fibonacci progression is the "golden mean:" a:b; where a is to b as a+b is to a. Numerically, the value is an irrational number (one incapable of expression in decimal form) a bit more than 1.6. Within the sequence, each successive number is 1.6 (plus a little) times the prior number. When the integers are small, the ratios are approximate, with each successive relationship being alternatively somewhat more and somewhat less than the golden mean; this is why the spiral pattern is inexact at the center of the flower head. As the numbers get very large, the ratio becomes exact; further from the center, the spiral patterns become more perfect.

In practical terms, nature is packing seeds most efficiently into a circular seed-head, satisfying every organism's drive to maximize the prospects for reproduction given a limited energy budget. The angle corresponding to the golden mean is 137.5 degrees, and each seed in the sunflower is offset from the one closer to the center by that amount (approximately so near the center, exactly so toward the outer edge). The result is a spacing in which all seeds are equidistant, and successful development yields two distinct sets of spirals, one in each direction, as in the photo above.
The botany of the sunflower is as fascinating as the mathematical theory. What we typically call a flower is actually many flowers (in this case, hundreds) bundled together into a head. The ray flowers form the outermost ring, and each has a single long petal. Within the ring, the disk flowers each have four tiny petals. When flowering, a threadlike stalk growing from the top of the ovary splits lengthwise to expose two sticky surfaces. The stalk is called the style, and each sticky surface is called a stigma. The structure formed by stigmas, style, and ovary is termed the pistil. The stigmas capture pollen transported by the fuzz on bee bellies, and if chemical signals between the pollen and stigma are in harmony, the pollen grain cracks open, and one of the two cells inside will burrow a tube down through the style, under the outer layer of ovary to its base, and from there into the ovule itself. There, the second cell, which has done no work so far except tag along, will divide into two sperm. One of these fuses with the egg cell, and further growth leads eventually to the embryo. The other fuses with two additional nuclei within the ovule, and further growth leads to starchy nutritive tissue. While these processes are occuring, the stigmas, style, and petals shrivel and fall off, their purposes complete. In sunflowers, the nutritive tissue is taken up by the embryo before seed maturation, some of it is converted to oils and protein, and then stored in the embryonic leaves (a.k.a. cotyledons). [In grasses (corn, wheat, rye, etc.), this nutritive tissue stays predominantly starchy, because it is not metabolized until after the new seed germinates.] The ovary wall develops into the hard black shell, and the ovule develops into the seed inside. Shell plus seed are technically a fruit.

We'll harvest the fruit and run it through a small oil press, creating an oil for cooking and salads. As we use it, we'll try to pause occasionally and marvel at the process by which seed becomes seed.

(Sara Sweet helped me with my homework by writing most of the botany section.) 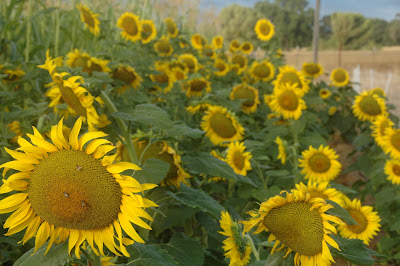