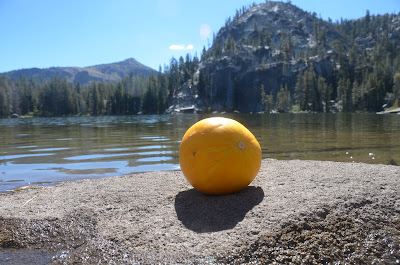 With the last melon of the season in the refrigerator, it is from a rational perspective time for denial about what's passing to morph into excitement at the prospect of what lies ahead in the fruit cycle. But melons cast a long shadow. With no disrespect intended to the apples (crisp and sweet or wondrously tangy), persimmons (just turning orange), quince (a huge crop slowly ripening), pears (luscious crisp Hosui and Shinko Asian pears, juicy Bosc and Bartlett), or swelling but still-green citrus, there's just nothing like a melon and no way for the last melon to go unmourned or to not spark some reflections about the passage of time.

The melon above is an Amarillo Oro, with a somewhat hard shell, light gold-green flesh, crisp texture, and intense sweet, honey-like flavor. It had the high honor of being selected for our annual (OK - second biennial) trip to Dardanelles Lake, which Frederik and I did to observe his 32nd birthday. We enjoyed a long swim, delighted to find the lake's waters much warmer in mid-September than they had been in early August two years ago. And we enjoyed the melon, of course, as we will the last Crane now in storage.

We had the lake to ourselves on a weekday until joined by a large and somewhat noisy (but in an entirely nice way) group of seniors out for the day. People with gray hair - what were they doing up there? Must have been in some stage of denial ...