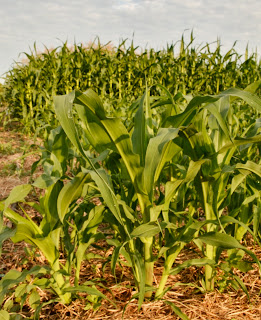 Our waves of grain rise, crest, and break in slow motion west to east across the northern half of our primary summer garden patch, as successive plantings sprout, race upward, mature, are stripped of their ears, and then are mercilessly cut down. This year's sweet corn is Sugar Dots, an heirloom hybrid that is a repeat for us. Our first planting was in mid-April; we could tell that we were pushing the season because the plants and ears were both on the small side. Our last planting was a few days ago. The five plantings in between were spaced at 10-14 day intervals. The third planting is giving us dozens of robust and tasty ears this week.

We're growing four separate corns this year. A few miles away, at my sister Rebecca's horse facility, we planted about a half-acre of flint corn. The variety is Roy's Calais, one of the original North American corns. It's growing exuberantly in well-fertilized soil, producing thin 15"-long ears. Although only 8 distinct rows of corn ring the cob, each row contains nearly 50 kernels, for ears of 400 kernels. The Calais will become grits and polenta.

Separate from the sweet corn, to avoid cross-pollination, we're growing some heirloom popcorn for our CSA customers, and removed from both of those we're trying a small patch of parching corn. What is parching corn? Stay tuned and we'll let you know.