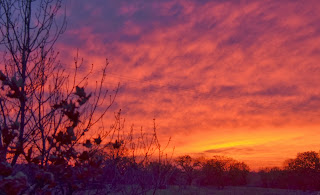 Our venerable senior rooster, Gaspar (blogged about here), met his demise today in the talons of a red-tailed hawk. Tonight's sunset echoed the red of his feathers.

He's our third loss in the last 10 days. Last week, on consecutive days, we lost young hens to red-tails. We responded to those kills by moving our mobile coop (flock inside) from the meadow west of the house to the orchard east of the house, hoping that the added cover and complexity and proximity to buildings would deter the hawk. No such luck.

Hawks have never been a problem in our eight years of pasturing chickens during the day and confining them in coops at night, but we're in the most severe drought that we've ever experienced here (and perhaps the most severe drought in the period of record). The drought has caused a crash in the population of voles (microtus) or field mice, a normally super-abundant small mammal that forms the base of the food pyramid for hawks and owls. Our out-of-control non-native turkey population probably played a major role as well. We haven't seen a single vole for a few months.

The hawks are hungry and desperate. The feed store grapevine tells us that other chicken pasturers in the area are also experiencing kills in areas where hawks have never been a problem. And from our hunter-friends we hear that the local pheasants clubs have to wait to release pheasants until hunters are in the field; otherwise the hawks get the pheasants first.

We'll miss Gaspar, a gentle giant who tended his flock gently but competently. He is survived by his son Sandy, almost a carbon copy.

Ethical questions arise. An animal rights activist friend thinks us remiss in allowing our chickens to be exposed to predators (but has worked hard to mandate better living conditions for egg-producing commercial flocks). She may have a point but both practical and (in my mind) humane factors weigh the other way. Practically, we don't have room to confine our 30-bird flock during the day (but will definitely consider it if predation reduces it to half that size). And would it really be humane to confine a flock that has known the many joys of free-ranging, from eating at will from nature's buffet to taking dust-baths whenever they choose to sneaking into the fig tree for snacks when I'm not looking? Having indulged the natural tendencies of our flock, is it headline material when "real" nature blurs the line and bites back?

I was genuinely saddened to find Gaspar headless and with his chest cavity excavated. He got a proper burial and will soon be nourishing a fruit tree.

I don't like the idea of feeding chickens to feed hawks. But I certainly don't blame the hawk for following its imperative. And I pray for rain soon and a rebound of the vole population.