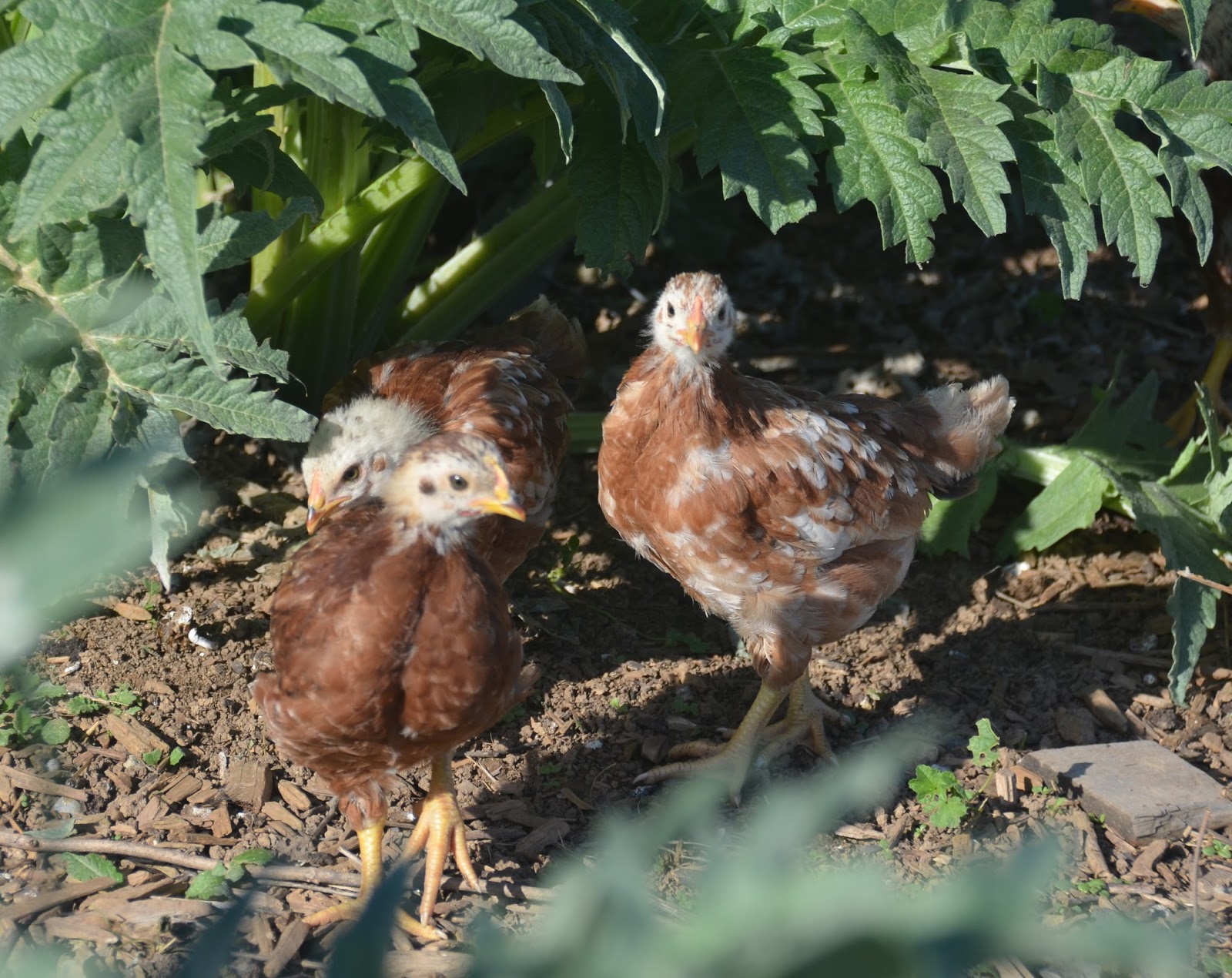 These somewhat prehistoric-looking creatures are 5-week old Buckeye chickens. We recently acquired 30 of these birds at 2 days old from a small-scale breeder near Merced. He (Tom Dinwoodie of Central Valley Buckeyes) is a part of a small but significant grass-roots effort to reestablish local breeding flocks of heritage varieties, and to "breed to the standard." Breeding to the standard means selecting from among your flock those individuals who most closely embody the traits described for that breed in the American Poultry Association's Standard of Perfection, the poultry breeder's "bible," and letting those birds reproduce. The indiscriminate mass breeding that goes on in large hatcheries means that most commercially available birds have slipped considerably from the Standard of Perfection.

The Buckeye was developed a hundred years ago by a woman in Ohio named Nettie Metcalf, whose goal was a hardy, large dual-purpose (meat and laying) bird. Developing a new breed is a slow process involving decades of work. Metcalf crossed Buff Cochins, Barred Plymouth Rocks, and game hens and produced her first genetically stable Buckeyes in 1896. Buckeyes were listed in the Standard of Perfection beginning in 1904 (and Netcalf is the only woman credited with the development of a breed). As a dual-purpose bird Buckeyes never had a large commercial presence and were in danger of extinction at one point. They are recognized on the Slow Food Ark of Taste.

These Buckeyes represent the evolution of our thinking about chickens. While we've always treated our birds humanely, giving them access to plenty of pasture, cover crops, and crop residues, we've never given a lot of thought to where they came from or how they were transported or the implication of large "mega-hatcheries" for animal health and welfare. That changed dramatically when we met Jim Adkins of the Sustainable Poultry Network at this year's EcoFarm Conference. Jim and colleagues are committed to restoring heritage breeds through distributed small-scale breeding farms, usually focused on a single species. Central Valley Buckeyes is a small enterprise inspired by Adkins. We don't intend to become a breeding farm (selling chicks) but we do intend to hatch our own chicks henceforth, either using a small mechanical brooder or the natural way using broody hens.

In parallel with this change in course we're pursuing certification of our laying flock as "Animal Welfare Approved." This certification is available to pasture-based operations that provide humane living conditions for the chickens and full-time (except at night) access to sufficient pasture to provide an ongoing source of natural feed (insect and plant-based) to meet most of the animals' nutritional needs. "Animal Welfare Approved" is the only meaningful certification available to egg producers in the U.S. because "free range" means only theoretical access by thousands of birds to a small bare patch of ground, "organic" can mean tightly-confined with no access to natural feed, and "pastured" can also be used without reference to the amount of pasturage actually available. The very specific "Animal Welfare Approved" standards are enforced through annual site audits.

We passed our AWA audit about a month ago and expect to be officially certified soon. It's exciting, because for consumers interested not just in animal welfare but in getting the best possible egg, nutritionally and taste-wise, it's the current gold standard.

Posted by Mike Eaton at 1:32 PM No comments: