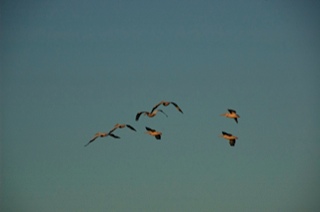 We awake to egret outrage this morning - honks and grunts of protest from a large congregation in the wetlands to the west - and as expected we see American white pelicans as well. The pelicans, now breeding mostly in Nevada and Utah, have dropped in to scour the drying ponds and lagunitas west of the Cosumnes River for stranded fish and crayfish, as they have been doing - no doubt - for thousands of years. The egrets take exception to what they must see as looting by outsiders and assemble with the pelicans in a frenzy of feeding. The egrets make a lot of noise; the pelicans are silent birds. The conflict must seem more than a little ritualized after all of these years.

White pelicans are North America's largest bird; only the (lighter) condor has a larger wingspan. But they soar seemingly effortlessly, working the thermals to gain altitude, large cohorts gliding quietly in coordinated flight.

Yesterday, a mixed cohort - many older, only a few younger - gathered in Sacramento to memorialize my first boss, a "small giant of a man" (to quote one participant) who had played a key role as lobbyist for the Sierra Club in securing enactment of all of the major natural resources legislation of the 1970s.* John Zierold had died in December; he would have been 89 years old last Friday. As remarkable as the man was the group drawn together by his memory, a staggering amount of collective achievement and intelligence in a medium-sized room.

The speeches and reminiscences were exceptional, some of them tracing threads of policy and politics back 60 years. One participant asked reflectively, "Was it John? Or was it the times?" The answer, of course, was and is "yes" - one person can make a profound difference, but only when the context is right, and only with group support. John had the quiet leadership skills, a gift for strategy and tactic, an amazing network of collaborators, and a large well of public concern to draw upon.

The largely unacknowledged elephant in the room yesterday was the reality that the 30- to 35-year period since the flowering of the environmental movement in California has seen isolated victories but generalized defeat. John Zierold's passion was for protecting what he called "Earth's life-support systems." Today, those systems, from soils to oceans to atmosphere, are eroding and being poisoned and acidifying and warming and altering in composition in ways that fundamentally threaten future life on Earth. Many of us have worked hard to reverse those trends, but without meaningful success.

"Was it us? Or was it the times?" I hope that the cohort that we've mentored will be as generous in framing a response to that question at some time in the future as we were yesterday.


*The personal tribute to John that I read yesterday is here.